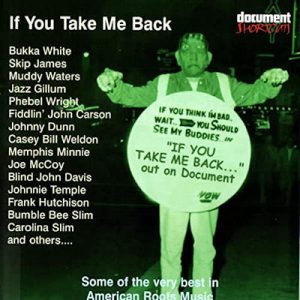 Back in the 1990s, I purchased a Document Records compilation CD, entitled, ‘If You Take Me Back’. In amongst the excellent and varied tracks, was a 1941 recording of the Gospel song, ‘Children Go Where I Send Thee’, in this case, entitled ‘Children Go Where I Send You’. This particular version was recorded in 1941 by The Harmony Four, I believe under the auspices of the Library Of Congress.

Over the years, this song has been recorded by numerous black and white musicians; The Golden Gate Jubilee Singers, Nina Simone, Johnny Cash, Tennessee Ernie Ford etc. The Harmony Four performance may not be the most polished or professional, but it has always appealed to me the most, and stuck in my mind ever since that first hearing in the ’90s.

Recently, I have finally had the spare time and the necessary recording equipment to pay tribute to the Harmony Four by making a version where I sing all the parts. Whether I have done it justice is a matter of opinion, but it was an itch I needed to scratch.

There are very few extant recordings of performances by the Harmony Four, but several are available from the collections of the always excellent Document Records.

Mat Walklate is a professional musician and music teacher.

Wikipedia entry for ”Children Go Where I Send Thee’

“Children, Go Where I Send Thee” is a traditional African-American spiritual song, as well as a cumulative song. This song is also known as “The Holy Baby” or “Born in Bethlehem.” There are many versions of this song, each giving a Biblical meaning to the numbers mentioned.