Shout music, a type of gospel music performed by shout bands. The shout band tradition of the southeastern United States originated from the exuberant church music of North Carolina. African American brass players formed bands, predominantly trombone-based, inspired by jazz, blues and Dixieland, gospel and old-time spirituals: a more soulful version of a New Orleans Brass Band. The United House of Prayer For All People, an Apostolic denomination founded in 1919 in Massachusetts, is particularly known for its shout bands.

Shout music is a type of gospel music characterized by very fast tempo, chromatic basslines, snare hits and hand claps on the upbeat of each beat. The organ typically plays dominant 7 chords while improvising over blues riffs. The pianist typically plays counter rhythms to the established rhythmic structure. There are many variations of this particular style of music. Often gospel artists will break into Shout Music at the end of a song or as a finale. Shout Music is used as a bed for vocal riffing and calling out of catch phrases, or “shouting.”

While shout bands became prevalent during the 1920s and 1930s, by the 1960s the trombone, which allows for a wide range of emotive expression, emerged as the lead instrument within the shout band. Large groups of trombones are treated almost as a vocal choir, each with its own part.

Upbeat and engaging, shout band music consists of three sections: the recitive and call, which involves a musical statement from the trombones; the aria, which develops the melody and tempo; and the shout, the ending call-and-response. As the song progresses, the sound intensifies from a whisper at the beginning to an exuberant crescendo during the shout.

The actual sound that is produced by playing is different from the strict and predesignated sound of most music. Shout band music is made to closely emulate the exact sound and techniques used by the voices of singers and choirs, including but not limited to vibratos, slurs, and glissandi. This is the primary reason that a trombone is typically found as the lead instrument.

The structure of shout bands varies greatly, but all typically have a few basic instruments in common: trombones, baritone(s), a snare drum and bass drum combination (or a basic drum kit), cymbals, and a sousaphone. Though they are not usually seen, other instruments are also utilized in shout bands such as trumpets, flugelhorns, saxophones, clarinets, flutes, washboards and more.

Shout bands are often mistaken for trad jazz bands due to similarities in instrumentation and style, but the differences in them are just as great. The first and most noticeable difference is the lack of sheet music. A shout band’s musical selection can vary from 30 seconds to as much as over 1 hour and may span many different songs. In contrast, a jazz band plays melodies and choruses from pop music and features individual solos. The second noticeable difference lies within the leaders. In a jazz band, there is usually one leader, known as the conductor who directs the band. In a shout band, there are as many as eight different leaders controlling different aspects of the band during a performance. There is, however, a conductor that does control everything that happens but he or she is normally listening to the band as a whole where the other leaders are listening to specific parts that they are assigned to.

With its sousaphone and baritone, the trombone shout band is representative of the worship services of the United House of Prayer, a Pentecostal denomination common on the east coast and quite active in the Greensboro, Winston Salem, and Charlotte areas of North Carolina. “Shout” describes the singing style and form of worship in many African American religious denominations. The “ring shout” -a type of movement-has been a feature of worship throughout the 19th and 20th centuries and is coupled with the act of testimony as a basic element of religious service. Many African-American Pentecostal denominations stem from the emotional Holiness Revival of the late nineteenth century when African American religious leaders renounced the staid, stoic ways of formal religion and believed salvation rested with an emotional form of worship. Speaking to God, through the “shout,” offered the direct experiences and the emotional touch of the Spirit.

The shout band style is up tempo, duple meter, bright, responsive to the congregation, and incorporates a chordal wall of sound as players form a semi-circle with the leader playing and directing in front. The musical form consists of three sections. The recitative, played by the lead trombone in a slow improvisatory manner, constituting a “call” for which the row tenor trombones play a fundamental chord progression. The second section, described by Damon (1999) as the aria, establishes tempo and sets the melody through repeated and then ornamented verses. The third section is “the shout,” with a call response pattern and a rhythmic cadence called “backtimin” or “polin” where the sousaphone, playing a walking bass line, provides the foundation for hocket and hemiola rhythms. The length of the sections are determined by the lead trombone who is responding to the congregation. Bands move from section to section from the leader’s gesture, known as a “rise”-either a melodic or physical cue. With a rapid vibrato intensifying during the shout, the band’s dynamics typically begin with a pianissimo during the recitative, a slow crescendo through the aria, and a dramatic crescendo (called “thundering”) through the shout with the lead trombone and the second trombone, known as the “run man” or “chaser horn,” improvising counter-melodies and rhythms. Shout bands may play continuously for up to three hours at religious services.

Why the trombone emerged as the instrument of choice is unclear; actually, early bands, circa the 1920s and 1930s, included any available instruments; however, the trombone has enjoyed close association with the African American church, most notably in James Weldon Johnson’s God’s Trombones, written in 1927. The first documentation of a trombone in the shout band is from the late 1930s (in Columbia, SC). This date can be contested as Abe Miles of Charlotte is said to have hosted the first trombone shout band in the 1920s. George Holland of Newport News, is also credited with introducing the trombone as the dominant instrument of shout bands. Robert Washington, also of Newport News, is known for introducing the Sousaphone.

Whilst there have been very few of the hundreds of shout bands recorded here is a recent Smithsonian Folkways album that represents the genre: 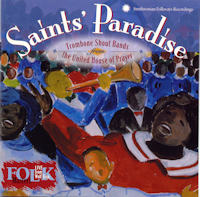 “Beyond jazz, blues, or gospel as most know it, this is the powerful trombone shout band music of the legendary United House of Prayer for All People. While much public attention is lavished on brass band jazz of New Orleans, these remarkable sacred shout bands of the Eastern seaboard have remained largely unheard except inside the church built by the late Bishop C.M. “Daddy” Grace. In this first-ever anthology, the top House of Prayer shout bands perform live—showing how a choir of trombone “voices” brings congregations to “one accord” of ecstasy with the Spirit.”

Source: Smithsonian Folkways (as above)

House Of Prayer Band at ‘A Taste of Charlotte 2012’