Sacred Harp singing is a uniquely American tradition of sacred choral music. Whilst having beginnings in seventeenth-century England it originated as Protestant Christian music in New England and later perpetuated in the American South of the United States. The name is derived from ‘The Sacred Harp’ (1844) tunebook printed in “shape notes”. The “sacred harp” is the human voice singing hymns to God. “Shape notes” are a music notation designed to facilitate congregational and community singing. Sacred Harp music is generally performed a cappella (voice only, without instruments), although occasionally may be accompanied by piano, harmonium or organ. 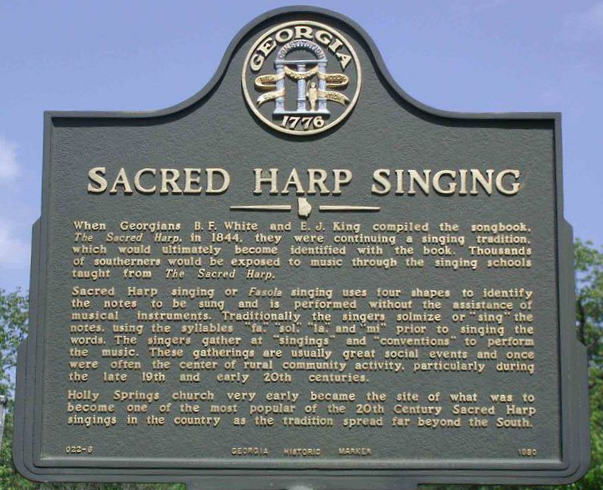 The Sacred Harp uses notation developed by the progressive New England singing masters William Little and William Smith, who published the Easy Instructor in 1801. Their shape-note system was designed to teach sight-reading and enable users to sing complex, sophisticated music.

The practice of singing the scale in syllables—”Do, re, mi, fa, sol, la, ti”—originated in Europe long before 1800. Sometimes not seven but four syllables were used: fa, sol, la, and mi. The major scale is expressed as fa, sol, la, fa, sol, la, mi, fa. Smith and Little gave each of the four syllables a shape: a triangle (fa), a circle (sol), a rectangle (la), and a diamond (mi). The musical phrase from the hymn “Wondrous Love” shows these shapes in use.

Singing masters taught sight-reading by having students first “sing the shapes.” This practice survives in Sacred Harp singing today. Singers first sing the shapes, or syllables for the notes of their parts, and then the words.

Shape-note tune books and the singing masters who produced them, as well as the social and cultural forces that affected shape-note singing, have been widely studied. Scholars have written extensively about The Sacred Harp itself, its editions, and its survival as the most resilient of the four-shape books. Neither the Civil War (1861-65) nor the introduction of seven-shape books and round-note denominational hymnals extinguished singers’ enthusiasm for The Sacred Harp. Nor did the coming of radio and records or such newer styles of sacred music as gospel.

Singers today are likely to use one of two revisions. The B. F. White Sacred Harp, known as “the Cooper book,” descends from a 1902 revision by W. M. Cooper of Dothan, Alabama. It is widely used in south Georgia, north Florida, and the Gulf region extending to Texas. It has a strong following among white singers but is also favored by African American singers in that area. (The Colored Sacred Harp, by Judge Jackson of Alabama, a Cooper book singer, was published in 1934. It contains shape-note songs composed or arranged by Jackson and other African American singers. This collection has been popularized by Alabama’s Wiregrass Singers.) The other revision, arising from White’s circle of friends, children, and pupils, came to be called “the Denson book.” It began with a 1911 revision chaired by J. S. James of Douglasville. This edition, in turn, was the basis for revisions by members of the Denson family of Alabama. Thomas J. Denson established the Sacred Harp Publishing Company, which published The Original Sacred Harp (Denson Revision) in 1936. The 1991 edition of The Sacred Harp was produced with an editorial committee headed by Hugh McGraw (1931-2017) of Bremen, where the Sacred Harp Publishing Company is now located. This 1991 book is the choice among singers in northern Georgia and Alabama; moreover, it is the edition most widely used nationally and internationally.

Today’s popularity of Sacred Harp singing owes much to B. F. White and the subsequent singers who collected and arranged tunes, taught singing schools, and wrote about and faithfully supported shape-note singing. Especially deserving mention is Hugh McGraw, who worked tirelessly to promote learning and to reach new singers. McGraw was named a National Heritage Fellow in 1982 for his efforts on behalf of Sacred Harp singing. Another singing master is Richard DeLong of Carrollton, who served with McGraw and others on the 1991 revision committee. Among Georgia singers who use the Cooper revision, David Lee of Hoboken has traveled and taught. The efforts of these singers and many others have spread Sacred Harp singing, and today singers gather in such Georgia cities as Atlanta and Tallapoosa, as well as in Albuquerque, New Mexico; Birmingham, Alabama; Boston, Massachusetts; and Chicago, Illinois.

Sacred Harp singing follow a characteristic pattern established by White and maintained by such later singing masters as the Densons and McGraw. The singers sit in a hollow square with four sections: tenor, bass, treble, and alto. Tenors face altos, and trebles face basses. In a manner reminiscent of the singing schools, a leader chooses songs, which are called a “lesson,” for the singers, who are called the “class.” Leaders take turns standing in the center of the square, beating time in a traditional method appropriate to the song’s time signature. Singing continues all day, with a noontime break for dinner on the grounds. These singings require stamina and musical athleticism, since the group may sing as many as ninety songs in the course of one day.

The sound of Sacred Harp may vary a bit from region to region, and white singers have different styles from African American singers. But regardless of location or voices, Sacred Harp sounds unlike academic choral singing or gospel singing in which melody dominates and harmony embellishes and supports it. The tunes of The Sacred Harp do have a melody part, the tenor, but it coexists with three other parts in no way merely supportive of a dominant melody. The parts in shape-note singing are so distinct that traditional tune books like The Sacred Harp print them on separate staves, displaying what is called dispersed harmony.

Gapped scales (having less than the usual seven notes) and unusual harmonies help account for this traditional music’s characteristic sound. Also unique is the doubling of two parts, both men and women singing tenor and treble. Untrained voices prevail, so the singing sounds loud and exhilarating. Although singers in different communities may prefer slower or faster times, leaders set the tempo. One occasionally hears singers warn each other, “Watch the leader,” when the class goes too slowly or runs over a fermata (pause sign).

In the 1844 Sacred Harp and its various revisions many writers’ works appear, but most of the texts are eighteenth-century English hymns by such poets as Isaac Watts,

Charles Wesley, William Cowper, Samuel Stennett, and John Newton. Some of these texts, as modified by nineteenth-century American singers, have acquired choruses in the camp-meeting spiritual style. In addition to the hymns, the tune book also includes anthems—passages of prose, usually scripture—and other texts, including odes and “set pieces,” words written for a particular tune or setting.

Some hymn tunes, both English and American, were originally associated with work songs, sea songs, drinking songs, or similar tunes of secular folk origin. Some, like the familiar “Old Hundred,” came from the psalm-singing tradition. Others are “fuging tunes,” complicated settings in a style originating in the English Renaissance and based on metrical psalm-tunes. The fuge, like the fugue of J. S. Bach and other eighteenth-century composers, takes its name from a word that means “to fly” or “to flee,” but a fuging tune is not the same thing as a fugue. A shape-note fuging tune has one or more sections with staggered entrances; the various parts begin the fuge in different measures, rest, enter again, and sing over each other, indeed making the music soar.

Composers of fuging tunes and other settings include New Englanders William Billings, Timothy Swan, and Daniel Read and a number of Georgians as well: White and his coeditor, the young E. J. King; John P. Reese and his brother H. S. Reese, born in Jasper County; and Elder Edmund Dumas of Forsyth. (Contributors did not always compose the tunes associated with them. In The Sacred Harp a tune may be ascribed to a composer, an arranger who learned it from older singers, or merely to an earlier tune book.) Some tunes, either from their origin or because of shaping through generations of traditional singers, may properly be called folk tunes.

Sacred Harp singing preserves traditional ways from earlier times but is also a living art form in which composers write new songs. The Sacred Harp, 1991 Edition, for instance, contains notable new compositions along with texts and tunes from previous centuries.

Since 1844 Sacred Harp singers have defined, nurtured, and passed along their art and their beliefs. Participants agree on two points. First, this singing is democratic and independent. Free of denominational ties, it represents a religious expression outside the limits of any church’s doctrine and discipline. Second, it is for singers, not listeners. Those who sing enter into a community where sophisticated musical skills, veneration for singers of previous generations, and constant immersion in the poetry of the songs make for a powerful experience. 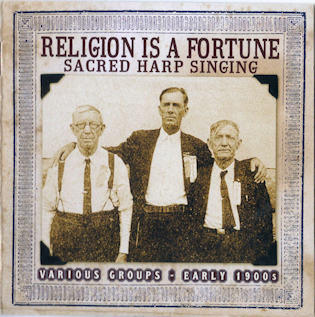 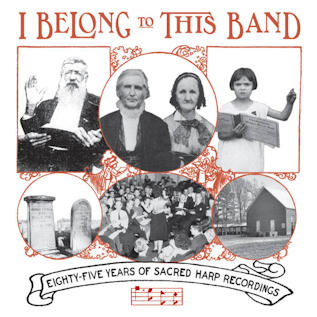 ‘I Belong To This Band – 85 Years of Sacred Harp Recordings’
Dust-to-Digital
Companion CD to the documentary film ‘Awake, My Soul: The Story of the Sacred Harp’

Sacred Harp Singing by Warren Steel, another web site on the Sacred Harp

The Sacred Harp, article from the New Georgia Encyclopedia

Sacred Harp Music, article on Sacred Harp from the Handbook of Texas online

Sacred Harp singing in Texas, includes composer sketches, including one of B. F. White