Part 1 – It’s Nobody’s Fault But Mine

This is the earliest recorded version of the song more familiar to early blues fans via Blind Willie Johnson’s “I’m Gonna Run To The City Of Refuge” (Co 14391-D) from 1928. See Table 1 for other pre-Johnson versions.

There are also 4 post-Johnson versions recorded in the pre-war era. This includes a 1934 cut by Tallahassee Tight under his real name Louis Washington. A year prior to Tallahassee Tight’s “You Better Run” (sadly unissued) an unidentified group recorded the song as “I’m Gonna Run To The City of Refuge” for the Library of Congress (L. o C.) at an unknown location probably in Texas. [Footnote 1: See B. & G.R. under “Unidentified Singers And Groups-Texas”. This side also appears to remain unissued.]. However, it is Blind Willie Johnson who coined the title, at least on record. In passing, the title “You Better Run On” (unheard by me) by the Gospel Light Jubilee Singers in 1939 is most likely to be a version of this song. Finally, the song has a spin-off title “I’m Gonna Run To My Lord” sung by The Robinson Children in 1942 for the Decca label

The Wiseman Sextette seem to be the original recorded influence of another Blind Willie Johnson song. From the same session as “You Better Run” comes the title “Lord, I Can’t Stay Away”. Although lyrically different, the tune is used by Johnson on his “Keep Your Lamp Trimmed And Burning” (Co 14425-D). However. the first reference to this song appeared in song-sheet form c. 1875 which was reproduced in the book on the Fisk Singers: “The Story of the Jubilee Singers-With Their Songs”. No.71 is titled “Keep Your Lamps Trimmed”, and includes verses not used (or not known?) by Willie Johnson.

[Footnote 2: Interestingly, a song titled “Let The Lower Lights Be Burning” is of a similar 19’h. c. vintage. Along with other songs it appeared in “Sankey’s and Bliss’s 1875 collection Gospel Hymns and Sacred Tunes; published in New York and Cincinnati:” (1).These songs in this collection “and in others that followed in the 1880s and 1890s derived from the rise of Sunday School songs in the 1850s, songs that were deliberately designed for younger singers; they were more sentimental, more optimistic, and often patterned on popular secular songs.”(2). In 1925 the Dixie Jubilee Singers recorded “Let The Lower Lights Be Burning” on Columbia. This was a mixed vocal septet with piano accompaniment and the only version listed in B. & G.R. — under this title. Despite espousing a similar theme to “Lamps”, this is a different song that fits Wolfe’s description to a ‘T’ and is probably from a white source. It transpires that the song was one of the new gospel hymns “popular nationwide (which) were especially successful in the South, where many of them even entered folk tradition.”(3). Although a different song both titles could have originated from an unknown earlier common source.] The only other pre-war side by a black artist to use the title was made in 1939 for the L. o C., as “Keep Your Lamps Trimmed And Burning (Don’t Get Weary)”. [Footnote 3: The only other apparent pre-war version appeared in 1937 for the L.o C. and is titled “Don’t Get Weary, We’re Almost Done”, by Martha Wright and Lillie Knox; at Howells Inlet, S.C. The title “No Ways Weary” by the Little Mt. Zion Choir in 1926 is a different song. See Document DOCD-5653.]. The bracketed sub-title appeared on two more sides prior to Johnson’s “Lamp”, also for the Library of Congress and remain un-issued. However, the first known recording to feature Johnson’s title in its lyrics is “The Eastern Gate” by the C.&M.A. Gospel Singers/Quintette in 1924, whilst otherwise bearing no relation to “Lamp”. (see Table 2).

One of only two pre-war and post-Johnson versions of “Lord, I Can’t Stay Away” was recorded by Rev. H.B. Jackson in 1929, but unfortunately remains undiscovered. In October of the same year the Pace Jubilee Singers cut it as “I Can’t Stay Away” for the Victor Record company

The Wisemans again are the first black artists to record this song, from the same session as the other two. This is of course the Blind Willie title “Let Your Light Shine On Me” (Co 14490-D) from his first 1929 session down in New Orleans. A choir called the Sandhills Sixteen (not in B. & G.R.) cut a version in c. 1927 and Rev. E.D. Campbell included a chorus on his sermon “Escape For Your Life” in November of the same year on Victor records. Also in 1927 an unissued version by female preacher Leora Ross is listed. Another preacher recorded “Let The Light Shine On Me” in 1928 which was issued on Okeh. (Table 3).

Interestingly, in 1930 one post-Johnson recording was issued as “Let Your Light Shine For Jesus” by Rev. J.L. Hendrix! By the sheer raw power of his sermon and rasping vocal he should have been Jimi’s granddaddy!

The Rev. E.D. Campbell is one of those shadowy figures who pepper the world of early blues and gospel. What scant details exist are to be found in the notes to Document 5389 which also includes the total issued output of Rev. Isaiah Shelton and Rev. C.F. Thornton. Campbell appears to have been a “jack leg” type of preacher; i.e. itinerant and “barely literate”. (4). Based in Memphis for awhile before presumably moving north to Chicago, Campbell was one of the harsh exhorting (and near manic!) preachers who invariably commenced a sermon with snatches of song; as was the fashion of many Southern black preachers on record in the early 20th. century. On his second session he introduced “Faith” (Vi 20810) with 3 verses of “I Know His Blood Can Make Me Whole” some 10 months before Blind Willie Johnson made his record debut, with this self-same song.  Table 4 includes the related “(She Touched) The Hem Of His Garment”.

A surprising source (on record at least) for one of Blind Willie’s most famous songs and one of his finest. Though this could be a secular take-off. (see Part 2). The 2 titles by Rev. H.C. Gatewood both incorporate a verse of Johnson’s song, which could well be semi-traditional. See Table 5.

The Gatewood sides are really two versions of the same title made for Merritt records and one purchased by Paramount for their own production. Merritt was a unique species: a record company owned by an African American (Winston Holmes in Kansas City) in the 1920s. But the label could not survive against the rich and powerful white opposition and soon became defunct. In 1929 ‘Original’ Bessie Brown made “T’ain’t Nobody’s Fault But My Own” (sic) which is lyrically a secular counterpart to the Johnson record but otherwise unrelated. Although Bessie does sing “T’ain’t nobody’s fault but mine” on one occasion. Several variations of the title were made between 1935 and 1941 including a side in 1939 by pianist Georgia White (unheard by me) for Decca. Intriguingly, she uses the title by Clara Smith cut some 14 years earlier.

“Witness”, of which there are 8 known recorded versions [Footnote 4: This total includes two takes by the Paramount Jubilee Singers.] in the pre-war era, is seen as being related to “If I Had My Way” and therefore a precursor; which is of course one of Blind Willie Johnson’s most well-known songs. (see Part 2 for further discussion). Again, Table 6 lists the relevant titles up to Johnson’s recording.

In 1928, the year after Johnson’s recording, a semi-ethereal version of “My Soul Is A Witness For My Lord” was made by the Silver Leaf Quartette of Norfolk featuring the beautiful falsetto singing of William Thatch, and in 1934 Austin Coleman and friends made a version as “My Soul Is A Witness” for Library of Congress; in Louisiana. Becoming almost unintelligible in its intensity and blood-curdling rhythms and shouts it continues this most ‘African’ approach that is to be heard on the titles by Rev. T.E. Weems and Blind Willie Johnson. 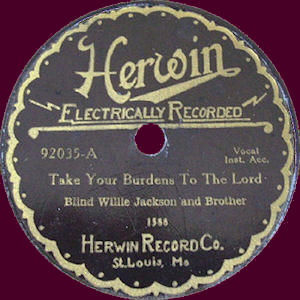 “Take Your Burdens To The Lord” (92035-A), Blind Roosevelt Graves and Brother, using the pseudonym Blind Willie Jackson and Brother.

H.  “You Better Get Somebody On Your Bond” – Fisk University Jubilee Singers 21/4/24

Surprisingly perhaps, there are very few recorded versions of this song. It is the only one Willie Johnson recorded more than once; the second version being his last recording, and one of his most powerfully moving. (see Table 8).

Blind Willie Johnson’s first “Bond” is taken at a faster tempo more in keeping with the Patton recording. Five days after this 1929 session the hugely successful Rev. J.M. Gates preached and sang on “You Gonna Need This Man Jesus On Your Bond” (OK 8779). Gates and his ‘congregation’ slowing things down. Johnson was to do likewise in 1930 and this is the superior of his two versions. It is quite possible that Gates (from Atlanta) had featured “Bond” for quite sometime prior to Johnson’s recording and Blind Willie was present at a live performance in a Georgia Baptist church. There is only one pre-war and post-Johnson recording of the song: “You’re Gonna Need Somebody” by a group from the Rose Hill Baptist Church in April, 1941, for the Library of Congress. There is a chance that “You’ll need My Saviour Too” by the Ravizee Singers (actually a quartet) made in 1937 for Victor, is another version of “Bond”.

Even less coverage on record of this title, being the only one on wax prior to Blind Willie’s version. (see Table 9).

Again, only one known recorded precedent. This side is sung in a harsh and barely comprehensible style with piercing antiphonal female responses and accompaniment to suit; consisting of guitar and tambourine. It might well have been an inspiration for Blind Willie and his partner/first wife Willie Richardson on similar sounding duets. But they are in slightly more mellow frame of mind on “When The War Was On”. (see Table 10).